The players of Rebecchi Nordmeccanica PIACENZA claimed this past Sunday Italy’s national cup but they do not have much time to celebrate as their next stop is the final of the 2013 CEV Volleyball Challenge Cup – Women. PIACENZA plays on Wednesday its home match with Dinamo KRASNODAR. This and other volleyball news read on Worldofvolley.com. 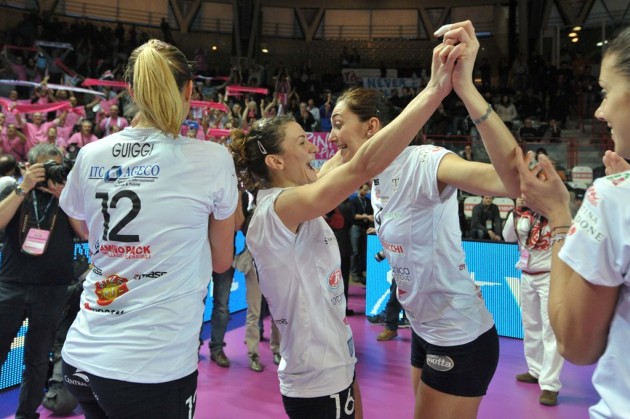 These teams have definitely dominated the scene in this year’s CEV Volleyball Challenge Cup with Dinamo having made it to the final by conceding only two sets to their opponents while PIACENZA did lose only three in eight matches. Right after winning the national cup, the group captained by 2002 world champion Manuela Leggeri started their preparations for that first European final. A few Russian fans are supposed to travel to Piacenza for the first match but many more will be following the adventure of their heroines on TV as the game is set to be aired in Russia as well.

Dinamo’s roster is composed of experienced and decorated players, including double world champions Yulia Merkulova – who stands at 202 cm – and Svetlana Kryuchkova, whose first gold medal came in 2006 as Russia’s national team was mentored by Gianni Caprara, the current head coach of Rebecchi Nordmeccanica. The starting six includes also US American Destinee Hooker – a silver medalist from the 2012 London Olympics who briefly played in Italy for Scavolini PESARO a couple of years ago – as well as the likes of Czech Helena Havelkova, who last year swept all of Italy’s domestic competitions and won also the CEV Volleyball Cup while representing the likes of Yamamay BUSTO ARSIZIO. This is not all as Dinamo will be able to count also on the likes of Yana Shcherban, best scorer of last year’s Russian Superleague, setter Irina Uraleva, a bronze medalist from the 2011 Universiade in Shenzhen, and middle blockers Marina Maryukhnich and Ekaterina Osichkina who stand at 197 and 192 cm respectively. To complete their roster Dinamo has signed also Elena Zarubina (Plotnikova), a silver medalist from the 2004 Olympic Games in Athens. Their coach is also well-known to the Volleyball family, as Avital Selinger has been the mentor of the Dutch national team uninterruptedly from 2004 to 2011.

Dinamo KRASNODAR has made it to the last act of this year’s CEV Volleyball Challenge Cup by losing only two sets in their previous eight matches. They started out by downing twice – always in straight sets – Slovakia’s Doprastav BRATISLAVA before conceding one set to TED ANKARA Kolejliler of Turkey. In the 1/4 finals Dinamo edged 3:0 and 3:1 another side from Turkey’s capital city, Ilbank Sports ANKARA, before routing twice – in three sets – LP SALO of Finland in the semis.

After losing to Ukraine’s Kontynium VOLYN LUTSK in the first round of the CEV Volleyball Cup, Rebecchi Nordmeccanica PIACENZA re-started their European campaign in the Challenge Cup easily disposing of two teams from Cyprus, Apollon LIMASSOL and TRB_Danoi AEL LIMASSOL. In the 1/4 finals Rebecchi got a couple of tough matches – won by 3:1 and 3:2 – with France’s Rocheville LE CANNET before they got back on track by beating Aurubis HAMBURG in the semis with a double 3:0.

The right ambiance for the first round of that much anticipated final will be contributed by a group of cheerleaders – aged from 12 to 15 – who this year ended up in fourth place, out of 70 entries, the national championship held in Cervia. To pay the right tribute to the guests from Russia, two clowns will be also performing on the side of the court assigned to Dinamo thereby recalling the unique tradition that Russia has developed in all circus acts. White and blue balloons – the corporate colors of the teams – will be decorating the venue and an internationally known make-up artist will be there as well at the disposal of all children.

To read more news from this competition click on CEV Challenge Cup – Female.

ITA M: New customized bus for the red and white