Perugia is forced to play in a different arena than their usual against Milan, which moved up to sixth as it took points in every single game played in the second half of season. 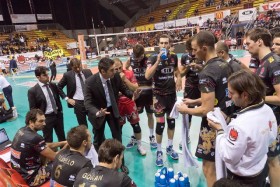