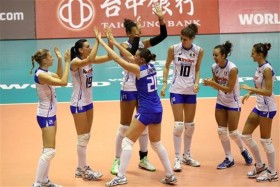 Italians before the decisive match against Turkey

The departure of the Italian national team for Japan is scheduled for Saturday, August 24 from Milano’s airport “Malpensa”.

Italy won the participation at the Final tournament in the last round after the thrilling victory in five sets against Turkey in Kaohsiung city, Chinese Taipei.

Final Six of the FIVB World League will be held in Sapporo, Japan from August 28 to September 1.