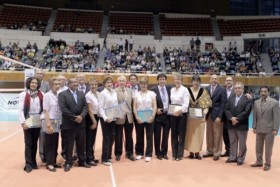 Members of Men’s and Women’s Mexican Olympic teams were honored before Mexico’s opening match against Trinidad and Tobago. The tribute ceremony was so special for those who played at the 1968 Games on this same court 45 years ago.

Players like the legendary Blanca Garcia, Patricia Nava, Isabel Nogueira, Maria del Carmen Rodriguez, Rogelia Romo, Gloria Casales and Gloria Inzua, were among members of the team that was coached by Macario Gonzalez.

Some other coaches like Gabriel Cherebetiu were also present, while the members of the Men’s team who played at that time attending the ceremony were Eduardo Sixtos and Juan Manuel Duran.

Some of the deceased members of the 1968 teams were mentioned like Esperanza Alicia Cárdenas and Trinidad Macías as well as Eduardo Jiménez and José Luis Martell García.

For more news from this competition, click on Pan American Cup 2013 M.