German VT Aurubis Hamburg obligated the Polish libero Izabela Śliwa for the 2013/14 season. The 1.68 m tall player was born in 1990 in Przybyslawice (Poland) and changed Chemik Police (Poland) for the seventh team in the last season’s Bundesliga. 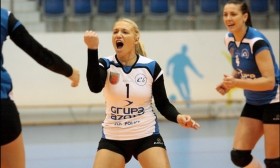 She began her career in Wiśla Kraków. From 2009 – 2011 she played in Atom Trefl Sopot, of which one year together with her mother Magdalena. In the following season she appeared in the jersey of Murowana Goślina and most recently in Chemik Police.

Izabela Śliwa was so far only member of clubs in her country so this will be first time for her to play  abroad. In her family, she has her biggest role model in her mother Magdalena who was in 2003 and in 2005 the member of the Polish national team at the European Championships. At the age of 43, she will be hunting for points in the upcoming season in Budowlani Łódź. It is going to be Magdalena’s 27 season.

Helmut von Soosten, the coach of VT Aurubis Hamburg said about the new player: “Izabela will take over one of the most difficult tasks in the team in the coming season. She will be at the position where Julie Jasova left the big footprints before she left the club. Here, of course, we must be patient and understanding, and walk on the path together with Izabela, even if sometimes she doesn’t walk the right way. But she brings us the optimal solution in the team and can, therefore, perhaps sooner than we all expect from her, convince us with good performances. In the test training she has made the first step, yet she has many more to make”.

GER W: Jennifer Geerties back in the...