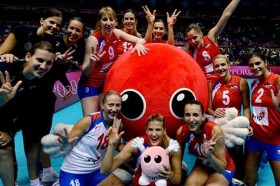 There wasn’t more than a point between the two teams from 3-3 to 10-10 in the first set, when Italy opened up a two-point gap three times. Two teams were level at 22 when Milena Rašić sent a serve long. Italy then held off two big spikes by Brakočević to set up a winner for Diouf that brought set point at 24-22. Serbia then failed to deal with a serve by Letizia Camera and Italy was 1-0 up in the match.

In the second set, Italy challenged a call at 9-5, which turned a long serve into an ace and gave Italy a five-point lead. Valentina Arrighetti delivered successive blows and Italy were six points ahead at 13-7 when Terzić called a timeout. After having nine points lead at 20-11, Italy went to sleep. Serbia made a remarkable recovery as they drew level at 22 on a block by Rašić and moved into the lead with another block, this time by Mihajlović. Diouf brought the scores level at 23 before Rašić made a quick shot from the center for set point and Mihajlović blocked Diouf for the set.

Italy breezed into a five-point lead in the third set but two classy, but were only two points ahead at the first TTO. A thumping serve by Brakočević brought the teams level at 9-9, but Italy led by two at the second TTO. Two Serbian errors and a thumper by Diouf put Italy 20-16 to finish the third set soon

A block by Rašić on Costagrande gave Serbia a four-point advantage at the second TTO and they were six points up at 21-15 after a block by Nataša Krsmanović, and Italy coach Marco Mencarelli called a timeout. He called another one at 23-16 after Rašić blocked Arrighetti. It didn’t do any good.

In the tiebreaker Serbia was 8-6 up and a rocket by Mihajlović put Serbia 13-9 ahead. Serbia got match point on a missed shot by Diouf and Mihajlović sent down the winning shot to earn Serbia the bronze medal.