Three-time CL winners and four-time club world champions Diatec TRENTINO have completely changed their look last summer as many of their stars were transferred to Turkey and namely to Halkbank ANKARA. However, the team now captained by middle-blocker Emanuele Birarelli just got back from Brazil where they won bronze at the 2013 FIVB Club World Championships after seizing Italy’s Super Cup before their trip to South America. After dominating the national and international scene for the last six years, though they have a very young group, TRENTINO remains a force to be reckoned with. 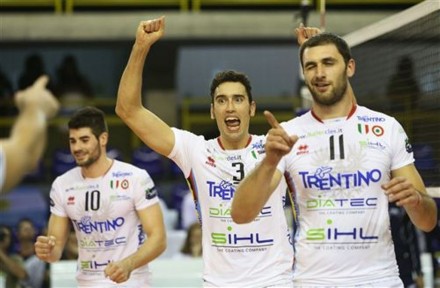 All players will be available for the first home game in the 2014 CEV DenizBank Volleyball Champions League where TRENTINO plays on Thursday Germany’s champions BERLIN Recycling Volleys. They will try to improve on their excellent stats as Diatec has won 44 out of their 52 CL matches since they debuted in the competition in the 2008/2009 season. Last year they lost in the Playoffs 12 to Russia’s Dinamo MOSCOW and missed out on a final four spot for the first time since 2009.

“We have a tough match ahead. BERLIN is a very good team” says head coach Roberto Serniotti who had worked with Bulgarian mentor Radostin Stoytchev for the three previous seasons. “However, if we want to live up to our reputation in this competition we need to start with a home victory. We are tired for we played 5 matches in 6 days last week and then we had a long journey back from Brazil. We do not search for excuses and we have to find a way to tackle with the situation. We know our fans will be at our side but we have a tough task: we need to start this campaign with a home victory”.

Also, check out all news from Italy.

Read more about this team on WoV Community profile of Trentino.

ITA M: OFFICIAL – Castellani at the...