CL W: Big battle for leadership in Pool B

Italy’s RebecchiNMeccanica PIACENZA and Dinamo MOSCOW will be playing on Tuesday for first place in Pool B of the 2014 CEV DenizBank Volleyball Champions League – Women. 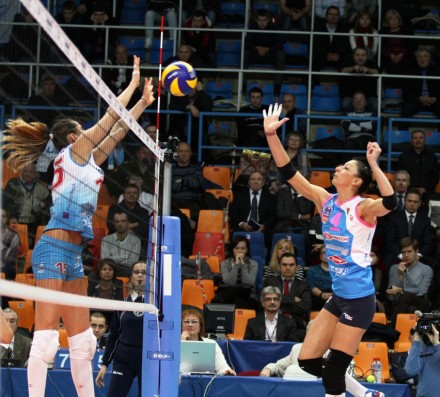 These teams are already qualified for the Playoffs 12 but nevertheless will be fighting for every single point so as to get a more favorable draw for the next round. The hosts as well as Dinamo have been performing really well lately and so the game is going to contribute world-class Volleyball for the fans that will be attending the match at the Palabanca.

The players mentored by head coach Gianni Caprara will be trying to take their revenge for the only defeat they have suffered in their first CL campaign for they lost in Moscow to Dinamo in the second round of the prelims. The rookies from Italy – though debuting in the competition – want to upset one of the most decorated teams of the last decade.

It is very difficult to make a prediction about the final result but counting on the support of their fans, Italy’s champions will be trying to add another chapter to their success story after last year they won silver in the CEV Volleyball Challenge Cup losing in the final to another Russian team, Dinamo KRASNODAR.