Unendo Yamamay BUSTO ARSIZIO will be playing on Tuesday their last game in this year’s European Cups hosting Azeryol BAKU. Unendo Yamamay is already eliminated from the competition and also from the race for a spot in the Challenge Round of the 2014 CEV Volleyball Cup – Women after suffering five defeats in as many matches so far. 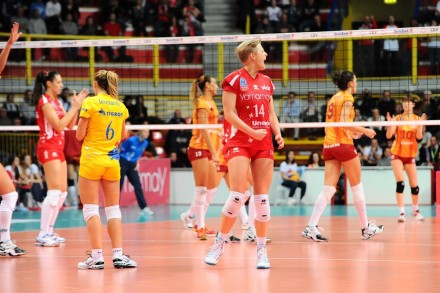 Still team captain Francesca Marcon and the other members of the team that had won bronze last year will try to finish their campaign on a high note to give their many fans something to cheer about. The so-called “Butterflies” as they are known in Italy have gone through many ups and downs since the start of the season and their mentor Carlo Parisi still has a lot of work to do in order to make sure the team grows so as to perform well for the remainder of their campaign in the national league. They just lost in straight sets their last game with Robur Tiboni URBINO so that they have been additionally distanced by the teams that are currently topping the charts there.

Serena Ortolani still is not back in her best shape after taking a year off to deliver her first child and therefore Parisi may opt to alternate her with young opposite Marika Bianchini. Valentina Arrighetti and Ilaria Garzaro are likely to play against Azeryol but 2012 London Olympian for Team GB, Ciara Michel, may also join the game after the British middle-blocker performed well in recent matches of the national league.

Azeryol BAKU edged Unendo Yamamay 3:2 in the opening round of the prelims but this time will be able to count on their German star Margareta Anna Kozuch, who is coming back to Italy after spending the last season in Busto Arsizio where she still has many friends and a close connection with the local fans.

CL W: Big battle for leadership in Pool B

INTERVIEW: Baranowicz for WoV – “Career of...