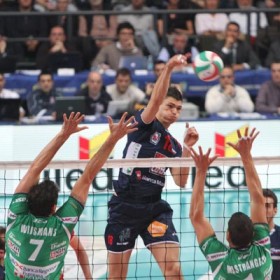 The name of the second semi-finalist is Macerata. The latter will fight it out in the V-Day – League final against Trento as it swept Cuneo in the deciding game 3 at home. Gym absolutely packed for the big occasion as Macerata will take part in the second final of its history following to one played in 2006. That year, Macerata had needed the decider again in the semi-final, qualifying in Game 5 at the expense of…Cuneo.

Dragan Travica (Lube Banca Marche Macerata): “We knew we needed a huge performance without Omrcen (disqualified following a yellow card in the last game) to beat Cuneo and I think tonight we could not have done any better. This proved to be a near-perfect team performance, I was even a bit surprised, given that we only had yesterday to try out various tactical options. Serve, block and dig are what makes volleyball and tonight we played at our best in these fundamentals. And we had the patience required because we knew we could have difficulties, the important thing was not to put our heads down. Now we’re going to Milan aiming not to finish second”.

Hubert Henno (Bre Banca Lannutti Cuneo): “We lost this series in Game 2, we were 1-0 up and with a chance to seal it at home. We wasted a golden opportunity. We basically did not turn up today”.