ITA M: Castellana Back in A1!

Castellana Grotte celebrated promotion to A1 thanks to its 3-1 home win over Molfetta in the final game 3 (3-0 in the series). 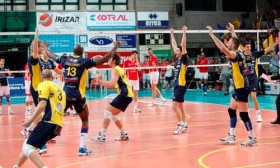 It´s party time in Castellana Grotte as final game 3 was won too against Molfetta, meaning the club will be back in the A1 next season. A great double for Castellana Grotte, which had also conquered the cup earlier this season. The A1 had been so close at the end of the regular season but Perugia had come on top. All the work had to be done again in the playoffs but Castellana did it. “We had the better of all the difficulties and all our opponents” said a satisfied coach Di Pinto.

Goran Maric added – “This was a promise, and although it’s been very difficult, we kept that promise. I expected it to be easier, but maybe it was even more satisfying to get the result this way”.

ITA M: Catch Sokolov if you can...