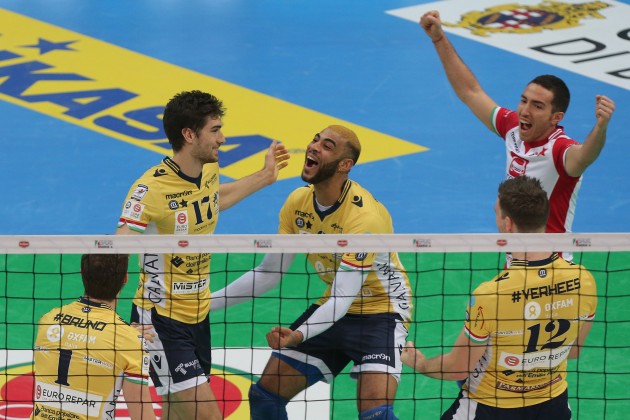 From the beginning of the match teams played “point by point” until the second time out.

Luca Vettori and Earvin Ngapeth were the leaders of Modena in the first set and what is interesting the Italian federation used “video check” in this final match of Italian Cup.

At the end of the first set Nemanja Petrić  scored point from the second line and finished set 25:19.

Modena start second set on high level – 13:8. Bruno has organized the first attack for his team too good that Trentino block couldn’t stop its opponent.

Team of coach Radostin Stoytchev made many mistakes while on the other side we saw fantastic attacks of Vettori, Ngapeth , Petrić, Piano and Verhees (19:15).

After two attempts, Modena took the third ball for 2-0 in sets.

Third set started very close. It seems like that Trentino  decided to start all over again. After equal play, Trento took leadership 12:11.

After 14:14 teams played “point by point” until 17:17 but Ngapeth in that moment said something to the first referee and got yellow card and immediately after also red card. Trentino took leadership 19:17 and very quickly 20:17.

After time out of coach  Lorenzetti, Modena equalized 21:21 and than Ngapeth scored point for 22:21. But, at the end Trentino finished set 25:23 thanks to Kaziyski.

For Modena and Ngapeth there is no joke. They opened fourth set 5:0.  On the second time out Modena is leading 16:7 and then Petrić scored point for 17:7. This time Trento’s coach  Radostin Stoytchev  got yellow and red card.

Once again Petrić  was fantastic, he scored ace for 20:9 and Bruno for 24:12.Filippo Lanza made mistake in service and gave last point to his opponent for 25:12.

GAME-CHANGER! What would happen if Orduna did...