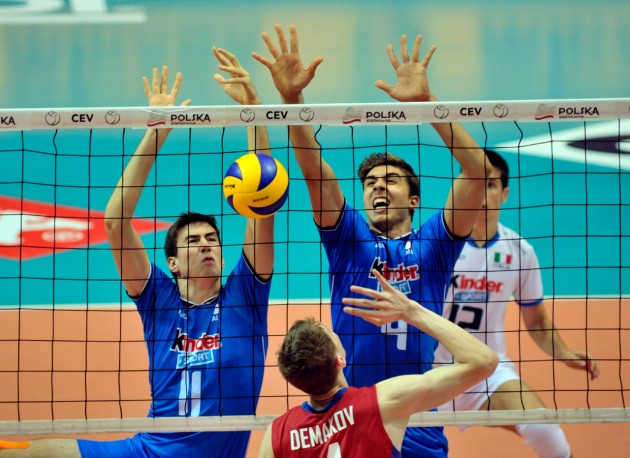 Enjoying the evident support of the local audience in Gdynia, especially given the fact that their head coach Marco Bonitta had mentored Poland women’s national team some years ago, Italy caught a flying start (8:4, 11:5) in their opening match against Russia, the nation that had stood on top of the podium two years ago in Bobruisk but with a totally different group. Italy showed very good quality and excellent variations in attack to cope with the usually tall Russian block that included also the tallest player of the tournament, Alexey Kobilev (210 cm). Italy enjoyed a margin of 6 points by the second mandatory break and Russian mentor Sergey Shlyapnikov did stop the game once more as his guys were committing a series of horrible mistakes to pave the way with gold for the “Azzurri” (21-14). Italy lost briefly composure and missed out on a series of set balls before the opening set was ultimately sealed by Luigi Randazzo for the final 25-21.

Russia came back in superb fashion in the opening phases of set 2 (5:0) before Randazzo took his side by the hand and together with Gabriele Nelli he stopped that terrific scoring machine, eventually leveling the count at 6 all. A block and a fast attack by Andrea Mattei flipped the score, with Italy going up 8:6 by the first mandatory stop, a scenario only a few would have predicted after that terrific Russian start. A lot of confusion was sparkling across the Russian defense and Italy intelligently profited of those shakes to accelerate the pace and go up 13:8, by impressing with extremely solid jump serves. After a short black-out – ups and downs are almost naturally associated with junior teams – Italy found back their best play to dictate the pace of the game also by the second technical time-out (16:12). Bombing their opponents – who had changed setter and some more players but all in vain – from the serving line, Italy cruised to a very promising 21-14; Randazzo contributed a pack of 6 set balls and Italy needed only one to cash the 2-0 (25-18) on a block by Andrea Mattei.

Italy had to come from behind in the third set where Russia asserted their supremacy up to the second technical time-out (16:11), but some intelligent moves and substitutions by coach Bonitta called for an Italian comeback with the score being eventually leveled at 17 all. As Sandro Caci finished a long and very spectacular rally, the “Azzurri” moved to the front for the first time (20:19) in that section of the game and the end was quickly approaching as Randazzo added another two points to his personal tally for the 24-21, for the 3-0 to be sealed only a few seconds later with a winning serve by Luca Spirito (25-21).

“It happens once in a lifetime to beat Russia in straight sets” said Bonitta after the match, “but we will celebrate it only for the next ten minutes and then move on to the next game with Finland. This was a good start, for sure, we know our weaknesses and overall I am happy with the quality we displayed today”.

ITA M: Game over for Cuneo