The final round of the 2012 CEV Junior Volleyball European Championship started on Saturday afternoon in Gdynia with Belgium causing a first sensation by cruising to a speedy 3-0 (25-21, 25-20, and 25-19) win to edge the 2010 bronze medalists of Serbia. 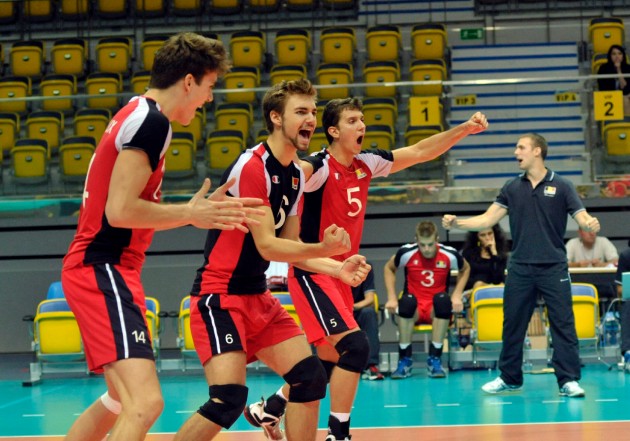 Actually the Serbian team is predominantly composed by players who last year claimed gold at the FIVB Youth World Championship in Argentina and the group includes also Uros Kovacevic, one of the most talented Volleyball players that have come up in recent times. Kovacevic was a member of the Serbian senior national team that participated in the London Olympics only a few weeks ago but his contribution was also not sufficient to stop the amazing display of consistency and quality provided by the Belgian players mentored by young coach Steven Vanmedegael.

Actually Serbia had started the game with the right approach and pace (9:6, 13:11) but the course of the set changed completely right after the second technical time-out as Belgium stepped up via their captain Tomas Rousseaux and wing spiker Francois Lecat to claim four set balls (24:20) and pocket the opening set by cashing their first opportunity to go for the 1-0.

Things did not change in the second set, where the Serbians looked evidently nervous and as they had to chase from behind, they regularly committed some silly mistakes in almost all fundamentals. On the other side of the net, Belgium – fired by a small group of fans, actually parents and relatives of the players – imposed their supremacy with a series of terrific blocks that stopped the way to the Serbian attackers, including Kovacevic, and with Rousseaux being the real leader on court, they confidently sailed away to finish it off at 25-21without relinquishing their lead from the start up to the end.

Serbia attempted a late comeback in set three, leveling the score at 16 all, but once again their opponents stayed cool, making the difference with their block to re-open the gap and move up by three (19:16). Probably still feeling some fatigue after his Olympic campaign in London, Uros Kovacevic was extremely faulty and eventually substituted by coach Milan Zarkovic; the Belgian block – at the end the stats registered 13 – looked like an impenetrable wall and a flurry of match balls was quickly converted via a block-out that sealed the final 25-19.

Head coach Steven Vanmedegael commented: “Today I said to the members of our delegation that I felt confident going into this game. We have scouted quite many videos and we were well ready to respond to all of their offensive solutions. Even when they made some changes to their starting six, we always reacted with the right composure, so I can only say that I am proud and happy to start the tournament with such a result. About Kovacevic, he did not play well, but you know, he first needs his team members to receive and pass well to dismantle his potential in attack and this did not happen today”.