Lube Banca Marche Macerata: First day of the year in the gym for the Macerata players, who will play back to back away games in the league plus the qualification in the Champions League 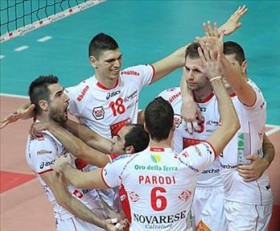 The first encounter will be in Verona, and this will also be the last one of the first half of season, which will decide who will be the club’s opponent in the Cup. It could be any of Belluno, Roma, Vibo or Monza. The team will then travel to Ravenna on Sunday before meeting Fenerbahce in Europe, where there is former Macerata player Ivan Miljkovic.

“They’re all difficult and fundamental games – said Serbian middle blocker Marko Podrascanin, who had a great game in the last outing against Belluno – As always, it’s important to focus on one game at a time. We have to take all three points at all cost against Verona in order to stay as high up in the table for the Italian Cup”.