Lausanne, Switzerland, January 2, 2012 - At the invitation of the Algerian Volleyball Federation (FAVB), top French trainer Mathieu Arnaud travelled to Algiers from December 27 to 29 to evaluate the Algerian women’s team ahead of their qualifiers for the London Olympic Games. Algeria will be hosting Olympic qualifiers from January 25 to February 3. 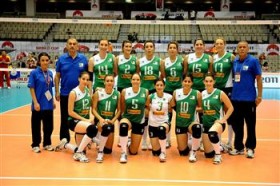 The Algerian women’s team at the 2011 FIVB World Cup

Arnaud was in Algeria to oversee physical tests for the women’s team on December 28 and 29 and to make recommendations for the new coaching staff of Reda Bouzid and Imad Saaidani.

The Algerian women’s team had a busy schedule in the latter half of 2011, including the African Women’s Championship in August, the FIVB World Cup in Japan in November and a tournament in Qatar in December.

Arnaud, who is attached to the Mulhouse team in France, also gave a lecture for trainers and athletes involved in volleyball and other sports at the Ecole Nationale Supérieure en Science et Technologie du Sport in Algiers.