Baku, Azerbaijan,, January 2, 2012. Azerbaijan’s heavyweight Rabita BAKU rounded out a splendid year by claiming the prestigious Women’s Top Volley International that took place in Basel (Switzerland) this past December 27-29. This trophy completes a unique collection for the “Dream Team” that has quickly sky-rocketed to the top of the world’s elite. 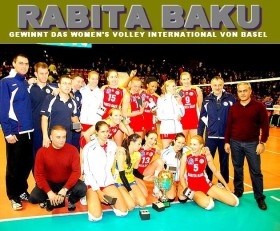 Rabita BAKU historically qualified for the final four of the 2011 CEV Volleyball Champions League this past March and eventually finished second in Istanbul losing only the final match to the local heroines of Vakifbank TTelekom. A couple of months later Rabita came out on top of the national league after edging tough opponents whose rosters included some of the finest Volleyball players in the world.

Runner-up from the last edition of the CEV Volleyball Champions League, Rabita got the right to join the 2011 FIVB Club World Championships that were staged this past October in Doha, Qatar. Rabita got past very strong teams from Brazil, Thailand and the Dominican Republic to advance to the final match and defeat there Vakifbank TTelekom in straight sets, thereby taking its revenge for the defeat suffered in the last act of Europe’s most elitist competition. This victory claimed by the group placed under the guidance of Olympic champion Zoran Gajic marked something special for Volleyball in Azerbaijan and for the country as a whole.

Rabita BAKU is currently ranked second in preliminary Pool B of the 2012 CEV Volleyball Champions League after edging Fenerbahce Universal ISTANBUL in the last round of action. Waiting for the last two legs to come, this powerhouse tested its likes also during the Christmas time by participating in the prestigious Women’s Top Volley International. Rabita defeated there teams from Brazil and Russia before routing France’s RC CANNES in the final match to round out the year with yet another title.