ITA M: Grebennikov to leave Lube at the end of the season and to return to France?!

Another big volleyball rumor is coming from Italy. 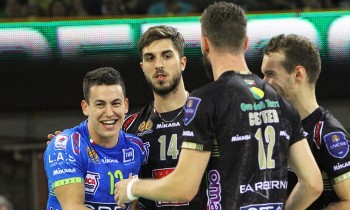 According to Gian Luca Pasini from gazzeta.it, Jenia Grebennikov will probably leave Lube at the end of the current season. Lately, he has been more playing as outside-hitter than libero and that might be the reason for him to look for another club. This source writes that the Frenchman has an offer from Paris Volley, so he may return to his homeland for the 2017/18 campaign!

Recall that Grebennikov has played for Rennes Volley from 2008 to 2013, while then he went abroad to play for VfB Friedrichshafen. In 2015 he signed a contract with Lube…

Hahahahaaa! He will return to France but LUBE will pay his contract! He will be the most paied volleyball player in the history of French volleyball championship!!!

ITA M: Mastrangelo is back in the...

Leonel Marshal as libero? It has happened!...