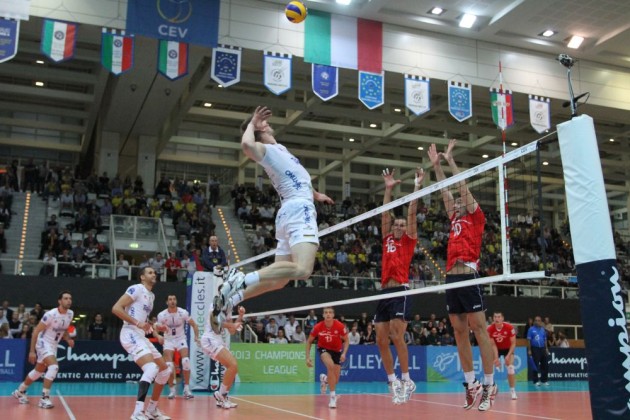 In the first set the world champions of TRENTINO Diatec did initially not find their best rhythm, with two mistakes in attack by opposite Jan Stokr contributing the provisional lead for the guests from Serbia (7:9), but then thanks to some powerful attacks of stellar spiker Osmany Juantorena, supported by captain Matey Kaziyski, the Italians claimed that first section of the game (25-18).

In the second set TRENTINO started really focused and controlled the game (8:3) especially via a good performance from the serving area. The world champions delighted the fans with some spectacular defenses up to a relatively speedy 25-17.

The domination of TRENTINO was evident in the early phases of the third set (4:0), but then the Serbians showed great resistance and surprised the home side (10:12) and the set was played point for point up to a tie at 19 before the Italians finished the job at 25-20 with a series of terrific serves.

The Cuban-born spiker Osmany Juantorena was named MVP of the match with 62% of efficiency in attack (he chartered 21 points including 3 aces). Noteworthy were also 5 blocks by middle blocker Burgsthaler. On the other side of the net were remarkable the performances of Filip Stoilovic and Dusan Petkovic with 11 and 12 points respectively.

“These are the first important points for our ranking in Pool C which is very tough. I am satisfied with the result; it is hard to maintain the concentration and a high level of playing after the World Club Championship, especially with a team that has nothing to lose. There is a real tour-de-force ahead of us, we need to prepare in the best way for the next matches, especially against TOURS VB” stated local head coach Radostin Stoytchev.

“Obviously we can’t compete on equal terms with TRENTINO but it has been a pleasure being part of this great event and playing our game. We are a very young and inexperienced team for this world-class Volleyball. But this is the right way to follow for us because the difference in the second and third sets was not that impressive” stated the head coach of Crvena Zvezda, Dusan Nikolic.

For more news from the Volleyball Champions League click here.

Italy: Cisolla: Experience tells me anything is...