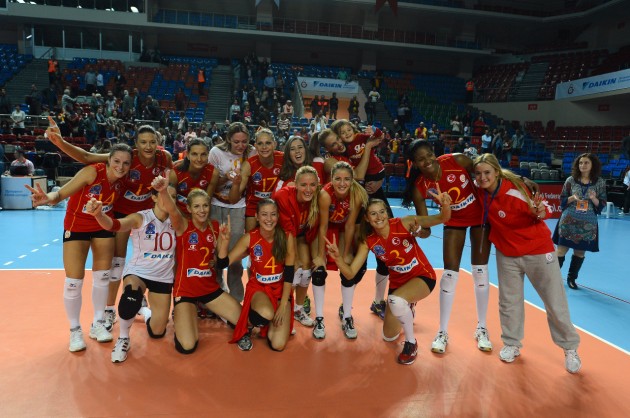 Galatasaray Daikin couldn’t catch a good start; even though the first technical time-out was in favor of the hosts (8:6), ASPTT MULHOUSE then got control of the operations (15:16) and could finally seize the opening set (18-25).

In combination with the start of the second set, Galatasaray showed a totally different face (8:4) and stretched the lead by the second mandatory stop (16:10) to eventually cruise to the final 25-19.

In set 3 Galatasaray lined up Özsoy, Molnar, Lo Bianco, Calderon, Gioli, Sinem Barut – who had joined the game already in the second set – and Necla as libero. Meanwhile, there were no changes for ASPTT MULHOUSE. Galatasaray imposed their pace there (8:6, 16:13) and could claim that section of the game quite comfortably with a speedy 25-15.

Things did not change much in the fourth set where Galatasaray got to the front by the first stop (8:6) but ASPTT MULHOUSE regrouped and pulled out a very solid performance to flip the score around by the second mandatory break (14:16). However, Galatasaray fought their way back and at 25-21 could celebrate a successful debut in this elitist and prestigious competition.

Having taken three points from this match, Galatasaray will be playing in the next round Unendo Yamamay BUSTO ARSIZIO of Italy this coming November 1 in what will be a remake of last year’s CEV Volleyball Cup finals.

For more news from the Volleyball Champions League click here.