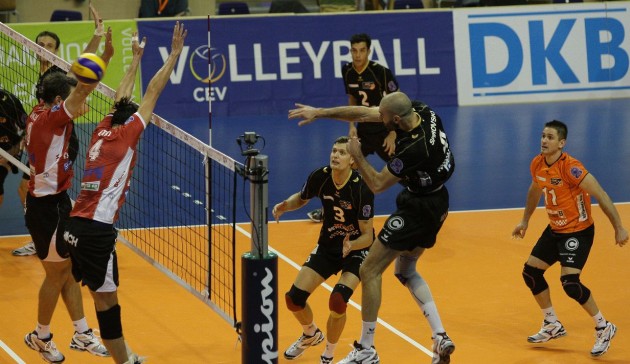 It was the assumed tight match in Berlin. Having difficulties to find their rhythm, the hosts started out nervously at the same time enabling CESKE BUDEJOVICE to take an early lead (1:3). Keeping up the pressure the seven-time Czech champion pulled away to a 6:8 lead and did not slacken its grip going to 11:15. BERLIN hardly found its way through the Czech block while not being able to hold back Peter Platenik and Jakub Novotny. Eventually it was Aleksandar Spirovski who marked the turning point (15:18), bringing BERLIN back into play after a long rally. A neck-to-neck race developed.  At 22:24 BUDEJOVICE had the chance to take the set, but missed this opportunity. The team of BERLIN fought back (25:24) and could finally bring it home (27-25).

A crowd of 3’528 spectators got to see a confident start of BERLIN in the second set. The Czech team however showed impressive resilience to keep in touch. The assumed tight match developed once again (5:5). The block of the hosts gradually found its form (13:11). BERLIN steadily pulled away over a 16:13 to a 20:16 lead. Even a time-out taken by the Czech head coach Jan Svoboda could not prevent BERLIN from further pulling away (24:20) and eventually taking the set (25-22).

Again it was opposite Aleksandar Spirosvski to mark a comfortable lead in the third set (5:1) forcing the Czech head coach to take an early time-out. CESKE BUDEJOVICE gradually closed the gap (7:6), but it was the 2012 German champion to take the lead at both technical time-outs (8:6, 16:14). CESKE BUDEJOVICE despite all resistance could not handle BERLIN’s wing-spikers and eventually lost the first match of this campaign in straight sets.

Scott Touzinsky, team captain of the side of BERLIN, was very happy about his team’s Champions League premiere: “I’m very glad we won – especially with this great crowd supporting us. Finally playing in Europe’s most elitist competition – a dream came true”, the US-American said.

His counterpart, Michal Sukuba, on the side of the Czechs praised the play of BERLIN: “They played pretty good. With our poor service we were not able to keep the pressure high”, he said.

“The block made the major difference today”, his coach Jan Svoboda concluded.

Mark Lebedew, BERLIN head coach, said: “We did not show the best Volleyball but I’m happy we won”.

For more news from the volleyball Champions League click here.