ITA M: Trentino and Modena get away from upset in the last moment, Lube easily prevail vs. Piacenza

Today’s encounters in the playoff quarterfinals of the 2017/18 Italian men’s volleyball championship SuperLega UnipolSai brought a lot of excitement. 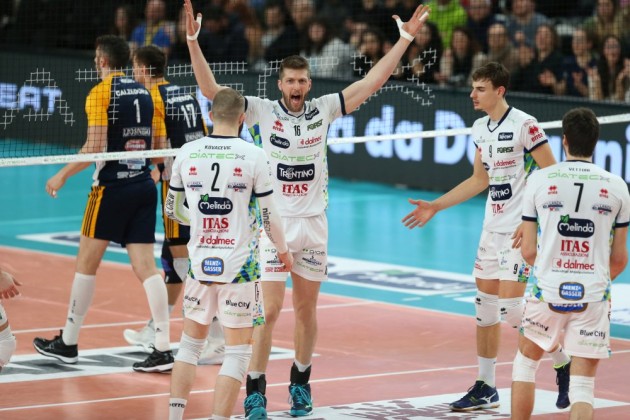 No.5 Calzedonia Verona nearly stunned No.4 Diatec Trentino in Game 1 of the best-of-three playoff quarterfinals. The first hour of an encounter went to the hosts. The second hour went to Verona. The culmination was in the tie-break which was intense until the very end. The attack of Canadian Nicholas Hoag, who was changing places on the court with Filippo Lanza throughout the entire match, and kill block from Slovenian Jan Kozamernik put an end to the game – 3-2 (25-23, 25-17, 19-25, 24-26, 15-13). The Serbian Uroš Kovačević topped Trentino with 25 points, while Kozamernik contributed with 5 kill blocks. American Thomas Jaeschke scored 18 points for Verona.

No less fight was seen in a duel between No.3 Azimut Modena and No.6 Revivre Milano. Led by Nimir Abdel-Aziz, who reminded SuperLega rivals on the way he terrorized their defenses before the injury, Milano came back to the match two times but succumbed in the tie-break. The Dutchman tallied 33 points, including 5 kill blocks. Matteo Piano also made 5 kill blocks for the losing side. The Frenchman Earvin Ngapeth scored 26 points for Modena. American Maxwell Holt served 4 aces.

GER W: Regular season is over; it’s time for quarterfinals