While beach volleyball got the bulk of media attention at the London Olympic Games with its photogenic stars and spectacular setting at Horse Guards Parade, the indoor version of the sport had to rely largely on … well, the sport. In the end, there were no losers. Beach volleyball was a sensation at London, while the volleyball competition at the venerable Earls Court arena – which was an Olympic venue in 1948 – simply sizzled. Read latest volleyball news on Worldofvolley.com. 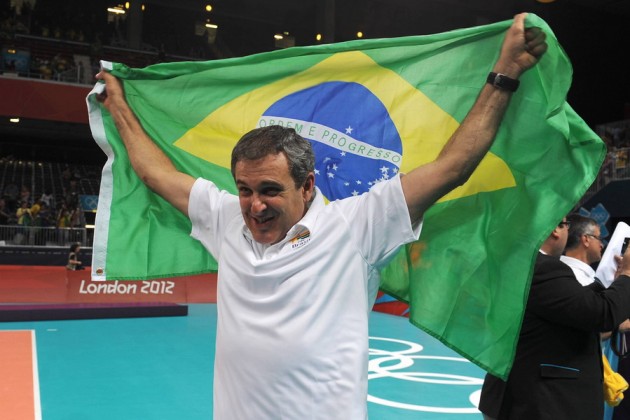 Surprises? It’s hard to say. There were times when certain teams seemed destined to take gold (or another medal), whether it was in the run-up to the Games or during the matches themselves. “Non-stop thrills” is a cliché, but for volleyball at the Olympics, it certainly fitted the bill.

Both finals were stunners, the Russian men fighting back from two sets down to triumph over Brazil – the first time that has ever happened in an Olympic final – and Brazil’s women picking themselves up from a first-set mauling to clinch a second successive gold with victory over world No. 1 USA. Italy‘s men denied Bulgaria a chance to collect only their second Olympic medal when they took the bronze, while Japan’s women overcame Asian rivals China (in the quarterfinals) and then Korea (in the bronze medal match) for their first Olympic medal in 28 years.

Until the Olympic final – or, to be more precise, until the second set of the women’s final – the women’s gold medal had USA written all over it. Hugh McCutcheon, who guided the US men’s team to a dramatic gold medal at the Beijing Olympics – had nurtured his team brilliantly since assuming his post, and in the lead-up to the Games had taken the FIVB World Grand Prix for the third straight year, condemning the Brazil team of Ze Roberto to a third successive silver.

But Ze Roberto has always admitted his players have a tendency to triumph or fail on their emotions. Where the Americans are consistently superb, on their day the Brazilians are irresistibly unstoppable. When the first set of the final ended with the astonishing scoreline 25-11, no-one – other than Ze Roberto perhaps – would have seen what was coming. Under the current rally-point scoring system, Brazil had never been hit that hard. They responded to the noisy fans in the 13,500 crowd by just playing their hearts out, taking the next three sets, 25-17, 25-20, 25-17.

“I think that the power we had, the power we gave to each other gave us the result we deserved,” Brazil libero Fabiana Oliveira said. “There are no words for this emotion. We love this, we live this both on and off the court. Being second was never an option.”

Japan‘s dream of winning an Olympic medal finally turned into reality as they were driven to bronze by “The Two Saoris” – Saori Kimura, the poster girl for Japanese volleyball, and rising star Saori Sakoda. They pushed Japan to a hard-fought three-set win (25-22, 26-24, 25-21) over Korea. Korean superstar Kim Yeon-Koung once again top-scored for her side with 22 points but was eventually bested by Sakoda who paced Japan with 23.

If the men of Russia and Brazil felt they had something to live up to after the women’s final, they didn’t disappoint. Brazil were two-thirds of the way to concluding a famous double when the Russians woke up and stole victory away with a scoreline that read: 19-25, 20-25, 29-27, 25-22, 15-9. In fact, Brazil went even closer than that. They had two matchpoints in the third set but couldn’t close the match out, and the relentless Russians just kept piling the pressure on. This time around, the Brazilians had no answer.

Dmitriy Muserskiy turned into the match winner for Russia as he was moved by coach Vladimir Alekno to play as opposite starting from the third set and eventually amassed an Olympic final record points haul of 31 points to anchor his side to their first Olympic gold medal since 1980. The Russians have only failed to medal in two Olympics – 1992 and 1996 – and now have a total of four golds. Brazil’s sadness was compounded when inspirational captain Giba announced his retirement, although there was some compensation when Murilo Endres was named MVP of the tournament.

Now looking ahead to 2016, the road to Rio promises to be full of further thrills and spills, of course highlighted by the FIVB World Championships in 2014, but equally of interest will be how the host nation – one of the heavyweights of volleyball – performs in front of their own passionate fans.

Over the last three Olympics the men’s team has won gold (2004) and two silver while the women finished fourth in Athens before becoming Olympic champions, beating USA on both occasions, in Beijing and London. Ze Roberto has recently been reappointed as coach of the women’s side as he looks for a third successive Olympic gold medal. If Brazil do “do the double” in Rio they will become the first country since Russia – 1980 and 1968 – to win both genders at the same Olympics while the women’s team will match Cuba as the only team (both women’s and men’s) to win a hattrick of Olympic titles.

KOR M: Spectacular save by Simon, but...