Italy defeated France 3:1 on Friday for the second day of the qualifying tournament for the final round of the 2013 CEV Youth Volleyball European Championship scheduled for April 12-21 in Laktasi (BIH) and Beograd (SRB). Sebastiano Milan and Slimane Belmadi gave their statements. 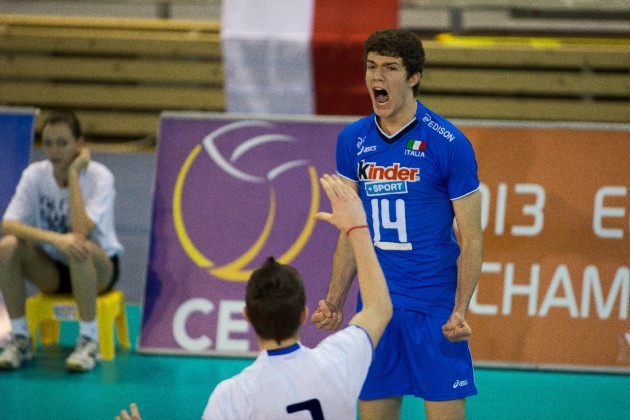 In what was actually their debut in the competition, Italy edged the neighbors from France with the score of 3:1 (25-19, 27-29, 25-18, and 30-28). Everyone was waiting for a demonstration of high-class Volleyball and so it was, with Italy opening strong to claim the first set (25-19) before France got back on track after seizing set 2 via a tremendous effort down the final stretch (27-29).

Italy did a good job in the third set to move the count to 2:1 and could ultimately celebrate its first win in the tournament after France missed out on three opportunities to go for the tie-break. Italy’s Tiziano Mazzone topped the charts of the best scorers with a massive haul of 25 points.

“France had showed excellent Volleyball in their debut against the Czech Republic, so we are very happy with the result of this match” said Italy’s mentor Andrea Tomasini. “It was not easy and the road to the final round remains long since this tournament features a series of strong teams”.

“It was important to start the tournament with a good result and I think it adds more satisfaction that we did so by edging a strong French team. We are a strong group and I am proud of being the captain of this team which has got the right skills and potential to be successful” added Italy’s team leader Sebastiano Milan (pictured).

“I am very disappointed because we had a total of six set balls and we eventually silvered only one, but this is Volleyball. If you can’t exploit such opportunities, you will inevitably end up losing the game” said France’s head coach Slimane Belmadi.

For more news from this competition click on Youth European Championship qualification M.