The International Volleyball Federation (FIVB) is delighted to announce the extension of its exclusive marketing, tournament organizing as well as television rights deal with the Japan Volleyball Association (JVA) and Fuji TV for another eight years to stage the FIVB Volleyball World Cup in 2015 and 2019. 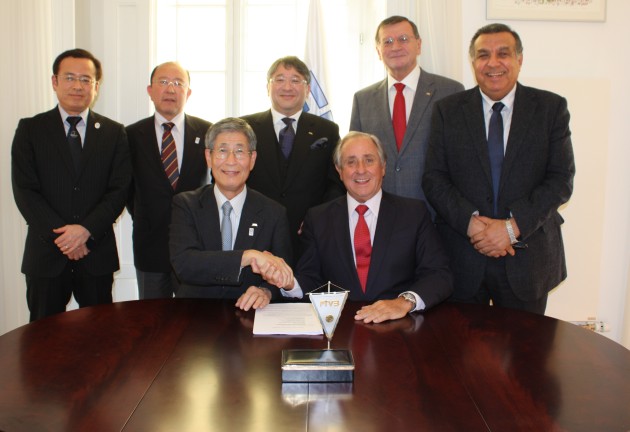 JVA and Fuji TV have been proud hosts of the FIVB Volleyball World Cup since 1977 when the quadrennial tournament was first held in Japan. Since then, the World Cup – which is traditionally the first Olympic Games qualification tournament for volleyball – has gone onto become the second-most prestigious tournament behind the FIVB World Championships.

“The World Cup plays an integral role in the Olympic qualification process and is a very important tournament for volleyball all round so we are delighted to be able to continue the tradition of holding the event in Japan,” FIVB President Dr. Ary S. Graça F° said. “This agreement ensures that one of volleyball’s most famous tournaments continues to be staged in one of the sport’s most popular countries, whilst extending our extraordinary friendship with Fuji TV.”

“We are very pleased to be able to host the FIVB World Cup for the 11th time,” JVA President Taizaburo Nakano said. “It is a great honour to have the opening Olympic qualification process in Japan and to continue our collaboration with the FIVB and Fuji TV.”

The World Cup is the FIVB’s second oldest competition. A men’s edition was first established in 1965 in Warsaw, Poland before stepping aside in 1973 for a women’s edition, making its debut in Montevideo, Uruguay. Following that success, the World Cup made the first of two major transitions with Japan appointed to host both the men’s and women’s contests in 1977. Since then, the proud volleyball nation has hosted the competition regularly and gone on to be the only team to have competed at every tournament, besides Korea in the women’s edition.

The second significant change came in 1991 when the World Cup became an Olympic Games qualification event prior to the 1992 Barcelona Games, guaranteeing the winners an Olympic berth. It has remained that way ever since, with the number of Olympic qualification berths increasing to three in 1995 ahead of the Atlanta 1996 Games.

In the 2011 edition, Russia won the men’s competition ahead of Poland and Brazil while Italy defended their women’s title with USA and China taking the other two Olympic qualification berths.

The number of Olympic tickets on offer will be reduced to two in 2015, with the remaining 10 Olympic berths coming from the following:

The 2015 FIVB Volleyball World Cup is proposed to be the first Olympic qualification event, taking place between August 21 and September 23. The proposed participants for the World Cup – which will feature 12 teams – is the host country, the 2014 world champions and two countries per Confederation either via a continental tournament or the two highest-ranked countries from the continental or FIVB ranking as of January 1, 2015.

ITA M: Towards the “black and white” evening against the champions