Hosts Costa Rica will meet Honduras for men’s gold medal of the volleyball tournament of the X Central American Games following their five-set victories over Panama and Guatemala on Friday. Read more volleyball news on worldofvolley.com. 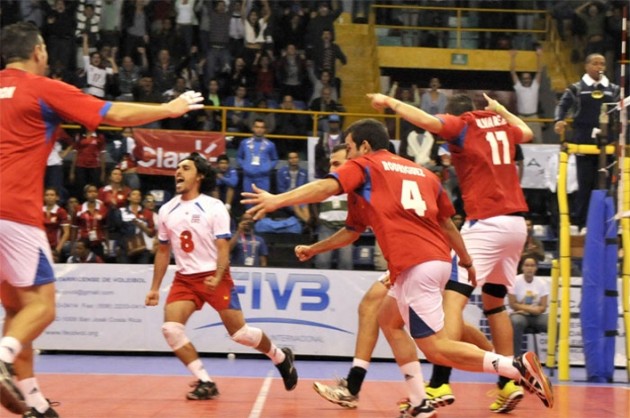 Costa Rica advanced to the match for the gold medal of men’s tournament following five-set (16-25, 25-23, 16-25, 25-22, 15-12) victory over defending champions Panama before 3,000 euphoric spectators. The home team won its only gold medal in 2001 but reached the finals in the past edition before losing to the Panamanians.

Richard Smith led Costa Rica with 20 points, followed by Jose Zumbado with 12. Domingo Avila and Donaldo Ureña registered 24 and 18 points respectively for Panama. “I am very excited, the crowd definitely contributed in today’s win. Panama was difficult to beat and we improved step by step. This is for Costa Rica,” said Richard Smith captain of Costa Rica.

Honduras won the battle against Guatemala in five sets (23-25, 25-21, 25-21, 15-25, 15-13) and will play for the gold of the men’s tournament. The defeated side held a slight advantage in the blocking category (9-8) but the winners were better in service points (7-2). The top scorer of the match was Honduras’ Luis Salgado with 39 points, while Jeyson Nery and Andy Leonardo charted 21 and 19 respectively for Guatemala.

Luis Membreño was very excited for his team’s victory saying “we’ve been playing together for a long time with consistency, Guatemala is a tough opponent.”

El Salvador beat Nicaragua in straight sets (25-18, 25-21, 25-21) to claim the fifth place of the men’s tournament. The winners built a 9-3 advantage.  Rodrigo Chavez was El Salvador’s best scorer with 12 points and David Mayorga had 10 points for Nicaragua.

Francisco Hernandez captain of El Salvador said: “We showed that El Salvador without nervousness and pressure can do better, so we’ll have to go back home to work on that”.

NORCECA W: Costa Rica and Guatemala for the women’s gold