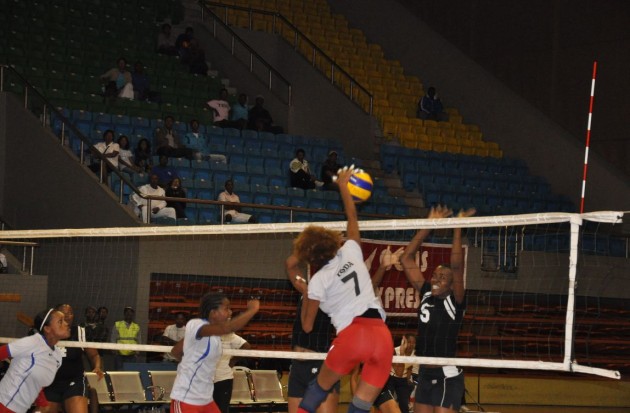 The teams finished first or second in their pools at the end of the preliminary round at the Palais des Sports in Antanarivo.

Ahly collected their third victory in Pool D to finish as leaders of the pool, followed by FAP who defeated VB Diamand of Madagascar. Ndejje University clinched a crucial victory against Manga Sport (Gabon) in Pool C to finish second.

At the end of the preliminary round, Ahly and Pipeline were the only teams to win all their matches without dropping a set.

Sunday is a rest day for all the participating teams and the competition will resume with the quarterfinal matches on Monday.

MB Bejaia overcame a sluggish start to defeat APR (Rwanda) in straight sets in 65 minutes. Bejaia started slowly, allowing the Rwandan team opportunities to challenge them in the first set, but then they controlled the match in the second and third sets.

In the competition’s most exciting game, GS Petroliers beat Prisons in a match lasting 123 minutes. It was a fantastic match full of thrills and action. After dropping a thrilling first set, Prisons rebounded in the second set to have a wide lead 8-3 and 16-11 at the TTOs before Zohra Bensalem and Safia Boukhima brought GSP back to lead 24-22. Prisons responded with good work from setter Jane Wacu to win the set 27-25. The fight became more aggressive in the third set as the Algerians showed a highly disciplined backline defence that prevail narrowly 25-23 to lead 2-1. Prisons fought hard to win the fourth set 30-28 after efficient blocks from both teams. GSP controlled the tiebreak thanks to Prisons’ mistakes to win 15-12.

Water Sport played their best to fly past Kutlwano. The Ethiopian team sent down some sharp services that upset Kutlwano’s reception and aided their attacks. Water Sports finished the pool matches in third position with 1-2 record, leaving Kutlwano at the bottom of the pool on 0-3.

Pipeline won a one-sided and were in total control. The team from Burundi were still feeling the effects of their great 3-1 win against Manga Sport the day before and couldn’t sustain their form. Pipeline got good performances from their substitutes and after Les AS fought hard in the first set, were able to fully control the match.

Ndejje University (Uganda) qualified for the quarterfinals for the first time following their straight sets victory over Manga Sport in 70 minutes. The Ugandan team was more determined to win as they fought hard in defence and were better in their attacks. They finished second in the pool with 2-1 record, while Manga dropped to 0-3.

Ahly completed a clean sheet and hammered AS Tanda in the competition’s shortest match, which lasted just 50 minutes. Ahly started with substitute players who performed well, especially Nahla Abdelkader and Nermeen Seifelnasr. In the second and third sets, Ahly introduced more of their main players and used their strong spike services to upset their opponents’ tactics. Ahly finished the group stage at the top of the pool with a 3-0 win-loss record, while Tanda dropped to 1-2 to be ranked third.

FAP came back from a set down to pull off a 3-1 win against VB Diamand (Madagascar) in 90 minutes. The Cameroon team started badly and lost the first set after a good showing from the Madagascar team. FAP concentrated then found top gear to take the next three sets. The victory improved FAP’s record to 2-1 to finish the pool matches in second position, leaving Diamand at the bottom of the pool at 0-3.