Guangdong Evergrande underlined their supremacy at the 14th Asian Women’s Club Volleyball Championship as the Chinese powerhouse clamped down Zhetyssu of Kazakhstan in four sets in the final on Sunday. Read latest volleyball news on Worldofvolley.com. 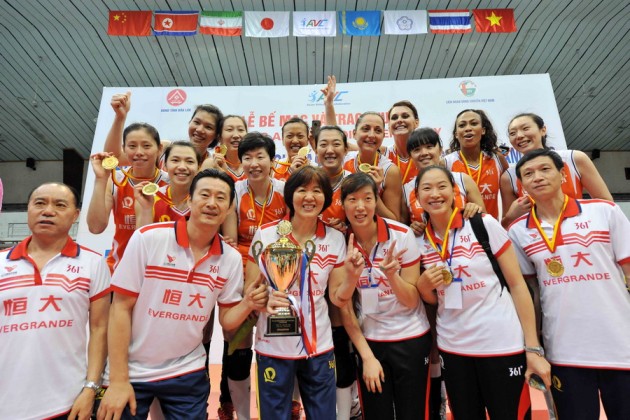 Following their victory, Evergrande, which also finished second in the Chinese Volleyball League, will now secure a berth to represent Asia at the FIVB Women’s Club World Championship in October in Zurich, Switzerland.

A total of 14 editions of the Asian Women’s Club Championship have been held and China has been a dominant team in the competition – appearing in 10 final rounds and winning seven titles.

Shanghai Cable TV represented China in the inaugural edition of the Asian Women’s Club Championship in Ubon Ratchathani, Thailand in 1999, but only placed third. It was LG Caltex of Korea that captured the title that year.

In 2000, Shanghai Cable TV made a strong comeback to win the title in home soil, in Shaoxing, China.

The Chinese side made an almost perfect run in the competition, not dropping any sets en route to the final. Zhetyssu was the only team that pushed Evergrande to its limits, forcing them to play an extra set to their usual straight sets.

Evergrande and Zhetyssu were evenly matched in skills and height, but it was Evergrande’s reinforcements that have done a lot of damage to Zhetyssu‘s defence. Polish player Katarzyna Ewa Skowronska Dolata and Italian player Carolina Del Pilar‘s presence in the starting lineup made a big difference.

The big crowd at the Buon Ma Thuot Gym was entertained by the excpetional performance of both squads. Evergrande played with a strong offensive game right from the start, capitalising on the excellent offensive mobility and spectacular attacking force of Del Pilar and Skowronska. Likewise solid blocking from Xu Yunli and Wang Ting gave them the two-set advantage 25-18, 25-17.

Olga Soboleva and Tatyana Pyurova were the two dominant forces for the Zhetyssu’s impressive comeback in the third set as they methodically punctured the Chinese defence with explosive spikes to help the Kazakhs win the thrilling battle 25-23.

Despite the determined attempts, Zhetyssu found their rivals too strong and eventually went down 25-16 in favour of Evergrande.

Evergrande‘s victory was celebrated with laughter and tears from the players and coach Lang Ping – hugging one another and capturing the moment in pictures.

Commenting on her team’s success, Lang Ping said, “In the first set, we were not used to the game against Zhetyssu. They played the European style. It was very tight and we were a bit tired, normally we played more relaxed.”

“I think we came back in the third set, but with many errors, we could not win. Overall, it’s quite OK for us in this tournament. We did a good job. After this, I will join the Chinese national team. I will maybe coach that team for the four-team (China, Cuba, Thailand and Puerto Rico) invitational tournament in China.”