For the second time in their two meetings, Tichele Solis was one of three players to score in double-digits as Belize overpowered Antigua & Barbuda in straight sets for third spot in their second round NORCECA Group J qualifiers for the 2014 FIVB Women’s World Championship in Italy on Sunday night. Top scorers were Solis, Shantell Arnold got 12 and Sherylee Young-Thornton. 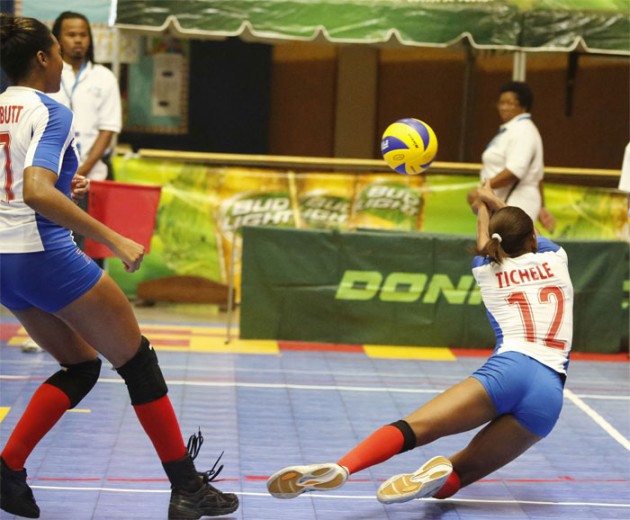 Playing in the penultimate match of the four-team tournament, Solis tallied 13 points, all spikes, while Shantell Arnold got 12, five of which were aces, and captain Sherylee Young-Thornton, 11 in their victory in 61 minutes at the International School of Curacao Auditorium, Willemstad.

Antigua & Barbuda was outplayed by a much more determine Belize unit which outscored its opponent, in spikes (31-15) and service aces (12-2).

Sherylee Young-Thrornton commented: “Coming into the tournament we wanted to finish in top two, but we were not able to achieve it, this NORCECA tournament was a great experience for us.“

Giselle Azar, Antigua and Barbuda captain: “We still managed to step up our passing from the two previous matches and we played with a little more passion and energy, but in the end it was still not good enough and I credit Belize for their play.“

Allan Sharp, coach of Belize: “For us it was a great experience to play against the taller, stronger and more athletic teams than we normally do, because in Central America we are used to playing against the smaller players. As a team and federation, Belize is very happy for the great exposure we got because we know it will help us to improve in the future.“

Antigua & Barbuda coach, Esron Gittens admitted his team missed some key players but he thinks his team is much better than winning only set in four matches.

By finishing third Belize still has a chance to qualify for the third round, but will need to do it as the best third place team from all six groups of the second round qualifiers.