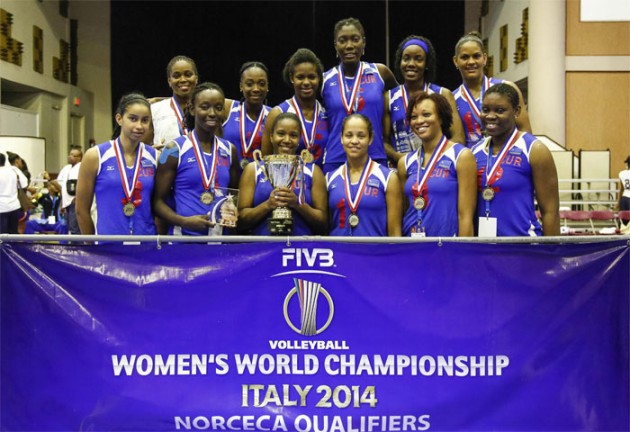 Leading the way for the host country, which played unbeaten throughout the tournament winning all four matches by 3-0 margin, was the USA-based Anthony who attends North Carolina Central University (NCCU) with a tournament-high 24 points, punctuated with 18 kills, four aces and two blocks.

Lianne Jamanika chipped in with nine, Geraldine Grigorius, eight, and Sonela Philips, six for Curacao which got the win in 56 minutes, the fastest of the competition. St Lucian captain, Natalie Edwards and Indira Laurencin were the only real source of resistance for the St Lucians with eight and seven points respectively.

From the opening set it was all Curacao as the host country stormed into a an 8-0 lead in the first before St Lucia got its first point of the match, and despite minor lapses in defence, the hosts won the first set with relative ease led by the four-prong attack of Anthony, Grigorius, Neysa Hooi and Jamanika.

The second set began the same way as the first with Curacao building a 9-4 lead before St Lucia closed to within two points at 12-10 after which the host stepped up its game and pulled away for another comfortable set victory.

Faced with the difficult task of clawing its way back into the match, St Lucia never got going and was easily overpowered in the third set, handing Curacao the gold medal before its vociferous home spectators who had crammed into the venue.

Maya Gomez, captain of Curacao: “The girls have been training for a very long time and its nice to see that our hard work has brought reward. Tonight’s final for us was not that difficult as we were very determined as a group to get the gold medal in front of our home crowd and in the end we were able to do that.”

St Lucia captain Edwards: “We know we can play better than we did and to be honest it seems as though we were just surviving each match.”

Henri Delfina, Curacao‘s coach: “With regards to Curacao I think we defended well and credit must be given to Neysa Hooi for having an excellent match while my setter, team captain Maya had her best match of the competition.”

St Lucia coach, Florian Combie: “We did not get the gold medal we wanted but second place also ensures that we qualify for the next round and we now have to regroup, encourage some players to rejoin the team and return as a stronger unit for the next round.”