WCQ W: Belarus and Israel set the tone on first day of action in Mogilev

The home heroines of Belarus opened the first-round qualifier for the 2014 FIVB Volleyball World Championship running this weekend in the city of Mogilev by edging Finland in three straight sets (25-23, 28-26, and 25-10). Read latest volleyball news on Worldofvolley.com. 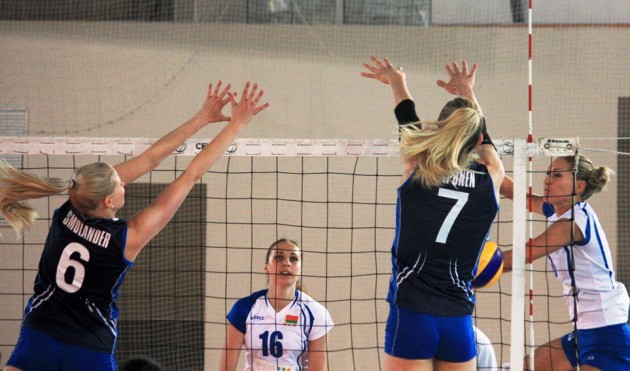 The group mentored by Arie Selinger exploited their experience to easily cruise past a young though determined Danish national team. Moran Zur and Anna Velikiy scored 14 and 13 points for the winning side while Trine Noer Kjelstrup paced Denmark with 11.

Belarus and Finland had already crossed their ways this past September in the second round of the 2013 European Championship and the Belarusians had scored two 3:1 wins back then. This time, benefiting of the expertise of their Norwegian head coach Tore Aleksandersen, the Finns did play pretty good and showed good resistance for two sets.

Volha Palcheuskaya started out strong for the home side in the first set (5:0) while Finland struggled in reception. After winning the first set rushing to the final 25-23, the late stages of the second turned into a real drama with Belarus that missed on a couple of set balls (23:21) before the score was leveled at 24. However, with good blocks and the attacks killed by Tatsiana Markevich and Anastasiya Harelik, Belarus brought it home at 28-26 and then totally dominated the scene in the third where Finland could score only 10 points.

Markevich top scored in the end with 18 points while Paulina Vilponen paced Finland with 16. “I knew that the first match here in Mogilev wouldn’t have been easy for us. Already last year Finland had showed that they are a well-organized team. It was an interesting match and a very important victory for us” Belarusian mentor Viktar Hancharou said.