On Sunday Slovakia booked a ticket to the third qualification round of the 2014 FIVB Women’s Volleyball World Championship as the home heroines beat Greece in the final match of the tournament held in Poprad 3-1 to top the charts of the Pool with 8 points. Greece finished second and will have to play the second round scheduled for later this year (October 2-6). In the opening match of the last day Austria edged Liechtenstein in straight sets. 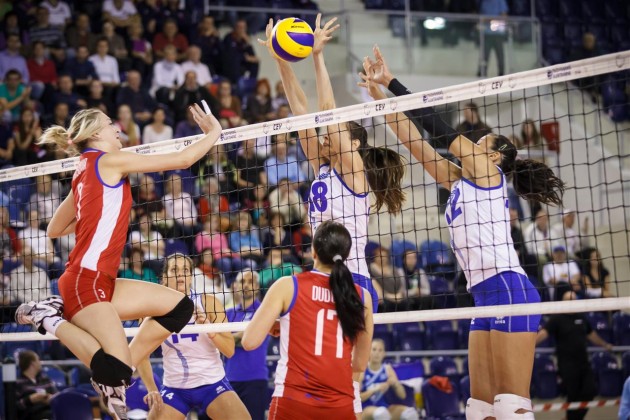 In the opening match of the last day Austria edged Liechtenstein in straight sets (25-14, 25-8, and 25-14). Austria finished third in the Pool with 4 points, while Liechtenstein settled for fourth. The first two sets were under full control of the Austrian team, Liechtenstein caused some troubles only in the third as it moved to the front by four points (14:10). However, Austria responded by scoring 15 points in a row and claimed the match – as expected – in straight sets. “We have played better and better. We have claimed 14 points in two sets and that’s great. It is a pity that we had a chance to win a set, but we dissipated that 4-point lead. This tournament was big experience for us, the organization, hotel and hall, everything was perfect” the assistant coach of team Liechtenstein Swen Mallschützke said. “We opted for our second line-up today and I am glad that we won. But we have not achieved our goal which was to finish in second place. It is a pity, because we played very good yesterday against Slovakia” the head coach of the Austrian team Zuzana Tlstovicova added.

In a battle for first place in the group Slovakia beat Greece in four sets. Greece started very good, played better in attack and reception and won the first set after a close final rush (25-27). The Slovakian girls were not in a good rhythm also in the second set and their head coach was forced to make changes in the line-up. Greece went up 21:19 but Slovakia came back and won the set 25-21. The first part of the third set was very close, but then Slovakia pushed by 700 fans widened the gap and could go for a second 25-21. This was the turning point of the match, Greece didn’t find the power to answer and the last set was completely under control of the home team. “We have played very slow in attack in the first set. Then we changed our game, our libero and middle-blocker played a great match and I am happy with the win. We have reached our goal to win the group here” the head coach of team Slovakia Miroslav Cada commented. “It was like two different matches today. We started good, we were disciplined and we played good. But we were afraid of winning the second set and then it was difficult for us to come back into the match. Second place was our goal, but we feel that we could have achieved more” the head coach of team Greece Ioannis Kalmazidis concluded.

She could not wait to enter the...