Belarus men’s national team will start this weekend its campaign in the prelims of the 2013 CEV Volleyball European League. The group spent the past week in Croatia getting ready for the first round of play in Pool C that is set to run this weekend in Rovinj. This is the fourth appearance for Belarus in the European League and head coach Victor Sidelnikov shares his feelings and expectations. 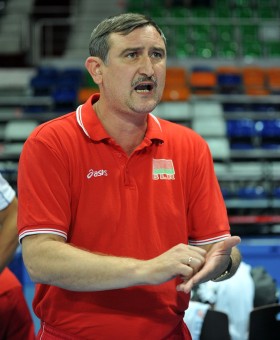 “We have been assigned to a very interesting Pool including the likes of Croatia, Turkey and Israel. Turkey is set to compete in the final round of the European Championship while Croatia just lost to Slovenia in the third and last qualification round. It is very interesting to see where we stand right now as we play first-class opponents” Sidelnikov says. “Initially we were supposed to start the tournament at home but eventually the venues were switched after Croatia replaced Portugal. We have a good chance to achieve good results especially as the last round will take place in July in Mogilev. We have revised our strategy accordingly and our goal is to finish first in the group so as to qualify for the final four in Turkey” he adds.

Questioned about the possible inclusion of superstar Aleh Akhrem – who plays in Poland for Asseco Resovia RZESZOW – on the group for the European League, Sidelnikov says: “We thought Aleh would join us for the home round in Mogilev. However, some players of the national team will participate in the Universiade taking place in Kazan in early July and we also have some other who are injured. Therefore I wish Aleh could join us already for the third round in Turkey. If we can come to an agreement, his addition would significantly strengthen our group”.

FRA M: Resume of the first round...