The players of Croatia men’s national team look very motivated to display a good performance in this 2013 European League and on Sunday they finished the first round of play in Pool C with a third consecutive win, this time against Belarus (3:1). In the other match of the day Turkey claimed their second victory of the weekend by besting Israel 3:1 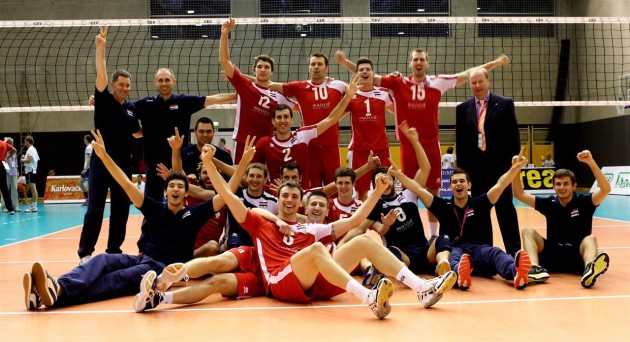 Belarus delivered a good performance in the first couple of sets but then Croatia stepped up and by pressuring their opponents in all fundamentals cruised to a well-deserved 3:1 victory. Belarus started out strong – especially in blocking – and did also exploit some errors by the hosts.

However, Croatia got back on track right before the money time with their superstar Ivan Raic who helped draw level at 18. 20-year old Fran Peterlin stood out from the serving zone and eventually Croatia cashed the first set at 21-18.

Things developed more or less the same way in the second set with the score evened at 18 there as well but this time it was Belarus that got the upper hand. Croatia unleashed their full potential in set 3 with Raic, Matija Sablijak and Darko Nojic anchoring the home side but well supported by the other players included in the starting six.

They left no chance to Belarus (21-13) and stretched momentum to the fourth set where they moved up 15:11 and practically closed the door to any possible comeback by their opponents.

The hosts of the final four needed 75 minutes of play to score their second win in Rovinj. Israel could not match the power of Turkey in serving and blocking.