Germany’s powerful players compensated their first loss against Iran on Friday with a straight set win 3-0 on Saturday. Zarrini and Denis Kaliberda were the top scorers. For more latest volleyball news visit worldofvolley.com 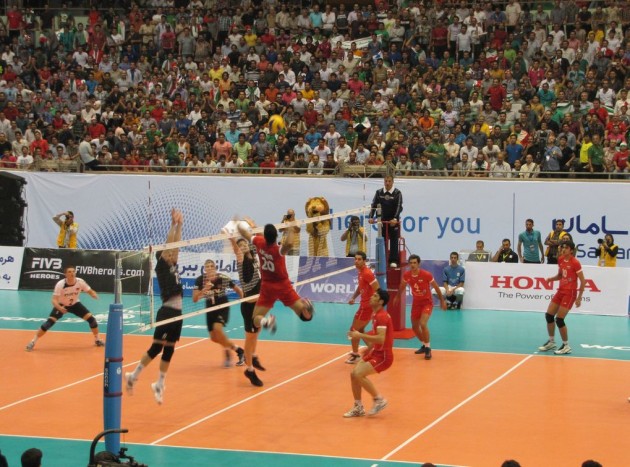 In the first set, Iran opened the match well 6-3, giving high pressure with strong spikes to their opponent by making receptions difficult and bringing down the block efficiency of the guests. Germany’s head coach asked for time out, and afterward his players did their best, but Iran made scores 8-5 at first technical time out. German then came back, with spikes and service of player number 1 and 15, to tie the scores at 10 and 12. Good blocks by Germany gave lead to them 15-13. Germany kept their lead by 19-16 with sharp spikes and perfect blocks. Head coach of Iran took a time out, but afterward Germany showed serious reaction and kept their lead 23-19. Iran made substations, but unintentionally mistakes of Iran in reception gave Germany the win 25-21.

In the second set Germany’s attacks in short minutes made scores 5-1. Iran made another substation, but still German was lead 6-3. In attack they showed high fighting spirit and took two consecutive points 8-5 FTT. By good reception from every position, Germany’s players enlarged the gap to14-7. The atmosphere of hall was very heavy for the guests, more than 12,000 were crying, clapping and blowing horns. At 14-10 Iran made distance shorter. And then 12-15, head coach of German asked for time out. Iran came back to the play and made scores 15-17, and then service of German went out. Shahram Mahmoudi hit a sharp spike scores changed to 18-17 for Iran’s benefit. Scored tied through 22, until Germany took the lead at 23-22 and made a substation. It was most probable the second set will be finish as the first one for the guest team. And so it was repeated, German won the set at (25-23).

In the third set, Iran showed a better start with a 3-2 lead. Spikes of Rahman Davoodi made scores 8-7 a double block of Zarini and Gholami made scores tie at 8. Later, careless spikes by Iran and perfect blocks of Germany made scores 17-18, immediately head coach of Iran asked time out. German got 2 more points by block and spike scoreboard was reading 19-20. Germany’s motivated players did their best and made scores 24 -22, and Germany’s coach asked for another time out. With a spike, Germany won the game 25-22.