Slovenia’s fairy tale continues at the 2013 EYOF as on Thursday the young girls mentored by head coach Joze Casar beat Germany in the semis to make it to the last stage of the Volleyball tournament. In the final game coming up on Friday Slovenia will play Serbia that claimed a second victory in the last couple of days over hosts the Netherlands. 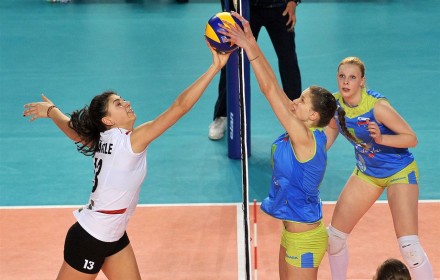 Slovenia had needed five sets to cruise past Germany in pool play but today the sixth-ranked side of the last European Championship cruised to a straight win (25-23, 25-23, and 25-18) to play for gold on Friday. After finishing fifth two years ago in Trabzon, the Slovenian girls will surely claim the best result in history for this small nation in any youth Volleyball competition. Germany’s Lene Scheuschner top scored in the game with 14 while Anita Sobocan was the most prolific player for Slovenia with 12.

Serbia stormed back from one set down to win the second semi with Tijana Boskovic and Bojana Milenkovic on fire as they scored 19 and 18 points respectively. The young “Oranjes” caught a good start but could not stand Serbia’s reaction; the girls around head coach Marijana Boricic will star for the second consecutive edition in the final game after two years ago they lost to Italy 1:3.

The 2013 European gold silver medalists Italy easily downed Greece in straight sets (25-20, 25-23, and 25-18) to somehow redeem for their disappointing performance in the prelims. Irene Botarelli was once more Italy’s most prolific scorer with 20 points including 5 aces while Olga Strantzali paced Greece with 14.

On Friday Turkey and Greece will open the program of the last day by playing the classification match 7/8 to complete their campaign in Utrecht.