Serbian star Jovana Brakočević is back in the game! After her coach gave her a break during the European League, where the Serbian team finished 5th, Jovana is now preparing for the World Grand Prix, aiming to achieve better results than last year. 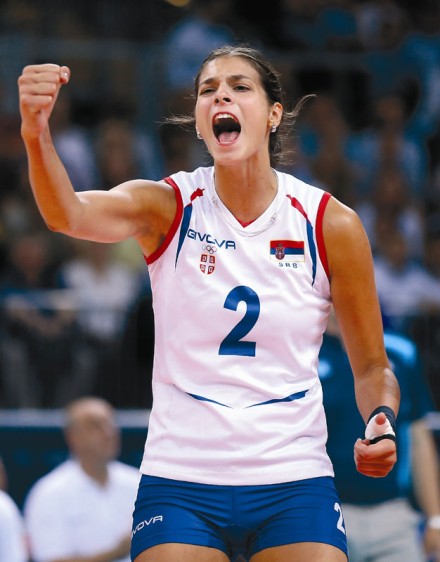 “Last year we were overloaded with tournaments and games and that gave us results I don’t want to remember”, admits Jovana Brakocevic, FIVB`s hero. “I hope that this year can be better for my team.”

The World Grand Prix is a prestigious and difficult tournament where the strongest teams from all over the world play against each other and travel to five different continents. But Jovana points out her team’s biggest rival: “The biggest opponent is always ourselves”, said Brakocevic.

The World Grand Prix is not the only challenge for the Serbian team. Shortly after the finals, Jovana and her teammates will participate in the European Championships in Germany and Switzerland where they will attempt to defend the title won in Serbia in 2011, where Jovana was named MVP of the tournament. Because of the schedule, this won’t be an easy task.

“Unfortunately we will not have time to prepare or take a quick rest before the European Championships. For sure it will be hard but I am sure we will give our best and try to defend our title”, said Jovana.

But apart from a difficult 2012 season, Jovana Brakočević can be happy with her club career.She played for the Turkish team Vakifbank Istanbul, and will stay for the next season. Jovana admits she likes living in Turkey, as the country reminds her a bit of Serbia.

“I like the life there, and the people both in and out of volleyball. The league is strong and our fans are incredible, very passionate for the colors of their team. I receive letters and some gifts from them which I keep at my home in Serbia.”

Vakifbank has won the Turkish League and the Champions League, where Jovana was named MVP. The Opposite probably has as many MVP awards as medals in her collection and CEV appreciated her performance in the 2012/2013 season, naming her “Newcomer of the year”.

“I was really happy and full of emotions that I can’t describe, but I am aware that in a team sport an individual award actually belongs to the whole team, as well as all the staff and all the people who helped and supported me and worked with me to become a better player. I am grateful and can’t thank them enough”, said Jovana.

“The awards are important as long as you understand that they are just for that moment, that one game, that one competition. The next one you have to work twice as hard to prove that you deserved the one you received before. But it’s also a good way to push you to be even better and motivate yourself to work harder!”