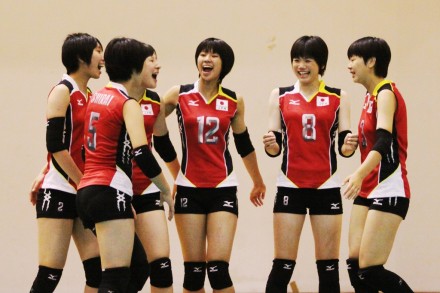 China, current world No.1 and second place at the previous world meet in Turkey two years ago, lost before their home fans to Japan in the showdown of the Asian Youth Girls Championship last year. Thus, they aimed high to make amends for that humiliating loss.

China, former three-time world champions, fielded a tall and towering line-up including the 199cm Yuan Xinyue and the 192cm Wang Yunlu in their tough opener against Asian winners Japan. The devastating cross-court spikes led by hard-attacking Miku Benoki and Kaori Mabashi gave Japan the 27-25 win in the close first set.

China produced the goods in the second set. They blocked and attacked, making use of their height advantage at the net to capture the set 25-18.

The third set was more thrilling when both sides poured everything they had. China, however, remained in sparkling form to win the close battle 26-24.

Holding a 1-2 disadvantage, Japan came up with a gutsy display. Cheered on by their supporters, the Japanese did not let them down to win the set 25-20.

The decider was very close from the beginning, but Japan led it all the way. Leading 12-10, Japan entertained a large crowd of Thai audience at the venue with their acrobatic smashes to stretch it to 14-11. China roared back to tie 15-15, but Japan had enough in their tank to take the remaining two points 17-15 and the marathon 129-minute battle.

Mizuki Yanagita was the top score of Japan to bag 36 points including 30 deadly attacks, while Yuan Xinyue scored a match-high 24 points for China.