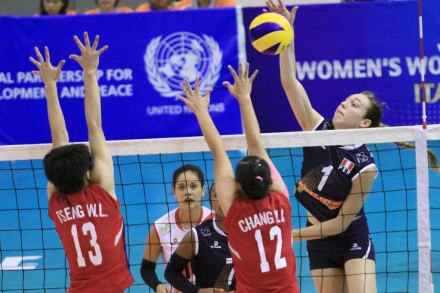 In a hotly-contested battle, Angela Leyva led Peru with 26 points including 23 devastating attacks, while Chen Tzu Ya emerged as the top scorer of Chinese Taipei after scoring 25 points.

Powerful hitter Chen Tzu Ya and Chang Li Ting unleashed a series of aggressive attacks, while Rosa Vaaliente was a smashing machine for Peru as she stretched her hands to smash her way. In a hard-fought duel, Chinese Taipei were more determined to capture the close opener 25-23.

Peru’s comeback attempts were really on track in the second set when they blocked and spiked with all they had. Their more determination was handsomely rewarded when Peru snatched the set 25-19.

After drawing 1-1, Peru, cheered on loudly by their supporters blowing ear-piercing horns and opening dancing songs from their speakers, attempted hard to win the following set.

Detgado Gudiel Violeta and Angela Leyva took turns exploding sharp spikes from the mid-court, but Chinese Taipei gave it all-out to shatter the rivals’ dream to take the third set 27-25.

In the fourth set, Peru came to life. They entertained the cheering supporters with their acrobatic spikes and solid block for the set win 25-20.

The decider saw Peru race to an initial 8-3 lead, courtesy of their excellent team work. Chinese Taipei tried to claw their ways back, but they became more prone with unforced mistakes. Peru captured the set 15-9 and the match.