Puerto Rico is ready for their fourth appearance at the FIVB World Grand Prix and they are confident of improving on their 13th place finish from 2012. 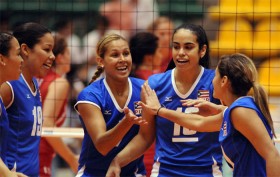 Head coach, Rafael “Epique” Olazagasti announced the Puerto Rican squad for the tournament on Monday, with Yarimar Rosa leading the side as captain.

“We have worked hard over the past week and can put in good performances during the Grand Prix,” Olazagasti said.

Olazagasti is making his debut as a head coach and he will be assisted by Jose Mieles, Esai Velez and Jose Barcelo.

His side features Natalia Valentin and Michelle Nogueras as setters, while the mid-blockers are Sheila Ocasio, Diana Reyes, Lynda Morales and Jennifer Quesada.

The receivers are Karina Ocasio, Ania Ruiz, Kanisha Jimenez, the opposite is Remy McBain, while Shara Venegas is set to be the libero.

Puerto Rico begin their campaign in Santo Domingo, the capital of the Dominican Republic and aside from the host side, they take on Serbia and Czech Republic on the opening weekend of August 2-4.

A week later they will welcome Dominican Republic, Brazil and Bulgaria.

They then wrap up the Intercontinental Round in Thailand’s capital Bangkok against Russia, Germany and Thailand from August 16-18.

To read more about this competition, click on World Grand Prix 2013.

TUR W: Çanakkale will start with preparations in August 10th

Playing volleyball while surfing? Yes, it is...