Serbia recorded their second victory in as many days in defeating a tough Czech Republic in straight sets (28-26, 25-18, 25-23) at the Volleyball Palace of Santo Domingo on Saturday. 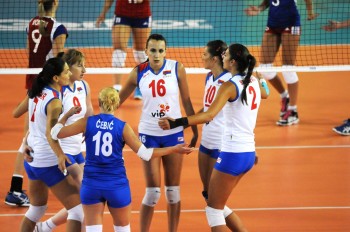 For second day in a row Mihajlović topped the winners with 22 points, including three blocks and one ace, while Brakočević added 19 with three aces. Milena Rašić had a match-high six blocks and two aces among her 11 tallies.

Aneta Havlickova and Michaela Mlejnkova each recorded 15 points for the defeated side while Ivana Pichotova chipped in with eight, including three aces.

See more photos from this match in Gallery below.