Serbia’s Jovana Brakocevic was named the Most Valuable Player of FIVB World Grand Prix Pool B competition held in Santo Domingo from August 2-4. 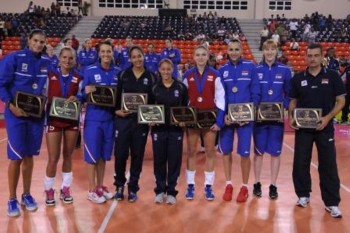 The best players of the pool B

The lanky opposite was one of three players from Serbia who were recipients of plaques during the award ceremony held on Sunday night at the Volleyball Arena of Santo Domingo, joining best blocker Milena Rašić and top scorer Brankica Mihajlović.

Serbia’s Zoran Terzić whose team won the three matches of the weekend and registered the maximum nine points, was awarded as best coach.

To read more articles from this competition World Grand Prix 2013.