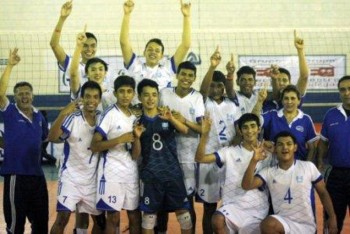 Guatemala continued to dominate earning their fifth consecutive win in the tournament without dropping a set crowning as Central American champions. Honduras finishes in third place.

Honduras pushed hard in the second set with advantage of 4 points up to point 21 but Guatemala gradually pulled their game together and a tactical mistake from the other side gave them the win.

“We lost focus in the second set but we pressured ourselves as we wanted to win the championship undefeated. This championship is thanks to our team effort and our splendid coach” said Carlos Lopez captain of Guatemala.

Erick Juarez, Honduras’ libero gave his impressions of the match and tournament

“I believe we could have done better, we came from less to more in the event; as for this match we had our hopes higher in the first two sets but in we got blown away by Guatemala”.

Opposite Erik Flores of Guatemala was named the Most Valuable Player of the 10th U-19 Central American Championship.

Flores was also awarded as the best spiker and his teammates Ricardo Mendoza and Erick Juarez received the trophy of best middle blocker and best receiver respectively.

AbnerFunez was the best digger and Jose Arellano the best setter, both from Honduras.

Carlos Vasquez for the hosts El Salvador was granted the award of best libero.