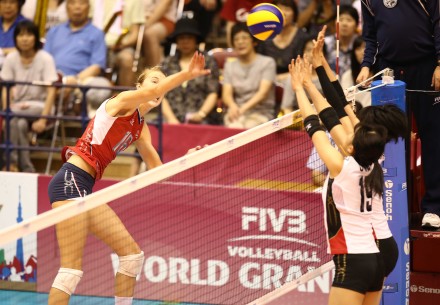 The win brings the USA up to second place in the World Grand Prix Rankings, although later matches on Saturday will likely bring their rank down slightly. The USA still has a good chance of making the Finals in Sapporo. Japan is automatically qualified for the finals, as the host country.

Not much went right for Japan in the first set – service, reception and setting were all problems – and USA cruised to an 8-3 lead at the first technical timeout. After a dropped point, Japan coach Masayoshi Manabe hauled his players off court for a talk. Yukiko Ebata and Saori Kimura responded with some decent hits that narrowed the gap from 9-3 to 9-6. For a while, Japan started to rediscover their usual dramatic defending. After two blocks by Nicole Fawcett on Ebata the USA was up by five points. A wide shot by Shinnabe handed set point to the Americans and Kelly Murphy put them 1-0 up with a crosscourt kill. Japan failed to earn a single blocking point in the set.

The Japanese players were only occasionally sparking into life, although they did finally manage to get their first blocking point. After the Americans cruised from 8-6 to 11-6, Manabe called his second timeout, but a kill and a block by Kimberly Hill ensured his team was still five points behind at the second TTO. Aided by good blocks from Akari Oumi and Mizuho Ishida, Japan closed the gap to 20-16 and Kiraly called a precautionary timeout. But he did not need to worry as his team earned set point on a kill by Hill and went 2-0 up when Fawcett blocked Kimura.

Ace by Kimura tied the game at 10-10 and the introduction of Miyu Nagaoka brought fresh life to the Japan team. She quickly thundered down three big spikes to help her team to a 16-14 lead at the second TTO, but the Americans took the next three points and Manabe called a timeout. Christa Harmotto came up with two big blocks for USA, but the pumped-up Nagaoka responded with one for Japan. Kiraly called a timeout after a USA mix-up put Japan 20-19 ahead, then called another two dropped points later after a service ace by Kimura. A wayward hit by Kristin Hildebrand handed Japan setpoint and an error at the net by the Americans gave Japan their first set of the weekend.

Manabe had his players off the court after dropping the first four points of the fourth set but his team could only manage to pick up two points before the first TTO. Manabe called his players in again after dropping three straight points to fall seven points back at 14-7, but with only Nagaoka offering any resistance, there wasn’t much the coach could do. The Americans were five points ahead at the second TTO – despite a three-point burst by Nagaoka – and eased their way to the finish. Two good hits by Kelly Murphy brought up set point and captain Hildebrand finished the match off.