Oranje too strong for Denmark 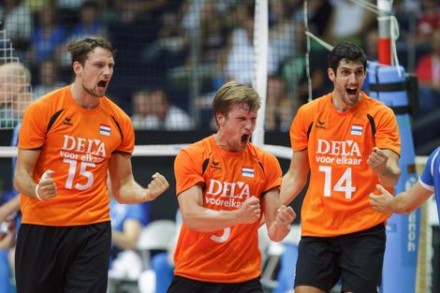 ,,Despite the 3-0 win volleyball was not on high level at all. It was enough to win, but overall I am not satisfied. Tomorrow we hope for a better game”,said Benne.

In the first set Oranje, came with some help from the Danes and easily got 7-3 lead. The margin was further increased in mid-set (17-10). Later service of Denmark that fell outside the lines, gave the Dutch man win with the score of 25-18.

Netherlands took the early lead again but Danes quickly responded. A service ace by Niels Klapwijk gave home team the lead again (13-11) and strong attacks of Netherlands made it 20-17. The set ended with 25-23 for the Oranje.

Since it was a friendly encounter, there was a fourth set. Also Maarten van Garderen, Thomas Koelewijn and Robin Overbeeke got some playing time. The Danes were keen to still get a set and came straight ahead (3-5). Netherlands were able to score the equalizing several times and hit at the right time to. At the end of the set Oranje passed (24-23) and was the first set point directly used with a block of playmaker Haarlem: 25-23.