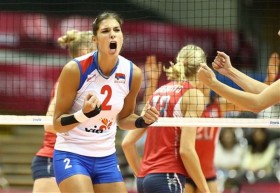 In the first set, two big thumps by Mihajlović gave Serbia a three-point advantage at the second TTO but the Americans kept fighting back and completed an impressive comeback after saving three set points, but Milena Rašić shut the door with a convincing shot down the middle that gave Serbia a 1-0 lead.

In the second set, Jenna Hagglund came in and delivered two service aces that helped move the Americans into a four-point lead at 17-13. A Hill ace – with Serbia libero Suzana Ćebić again the unlucky recipient – brought set point and Kristin Hildebrand blocked Mihajlović to end the set and even the match at 1-1.

USA had the early advantage in the third set but some crunching kills by Brakočević kept Serbia in touch. Kiraly called time outs at 10-8 and 14-9 to try and get his team back on track but the Americans fell six points back at 17-11 after two kills by Mihajlović. A couple of smashes by USA captain Hildebrand kept the Americans alive but Serbia had a 2-1 lead in the match.

In the fourth set, no team could get more than a point ahead until 21-21 when a good serve by Brakočević set up an easy shot for Nataša Krsmanović to put Serbia 23-21 ahead. Two match points came after a neatly placed tip over from Brakočević, and Serbian captain Ognjenović finished things off with a classy first-time tip over at the net.

Serbia had nine blocking points – including five by captain Maja Ognjenović – while the Americans had seven. Serbia had the edge in service points, 7-6.

See the profiles of Serbia and USA.

WoV Quiz: Do you want to be at EuroVolley Finals?