Cuban Michael Sánchez Bozhulev, one of the best opposites in the world, made the decision to change employer. 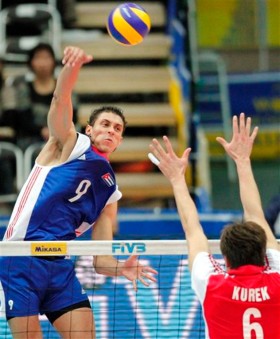 The 27-year-old player spent last two seasons in Russia, where he first played for Lokomotiv Novosibirsk, with whom he won the Russian Cup in 2011. He was selected as the most valuable player of the tournament.

Then he went to Fakel Noviy Urengoy, but in the team led by Ferdinando De Giorgi he did not play a single game so during the season he moved to Qatar, in the team coached by famous Ljubomir Travica, Al-Rayyan VC.

After this short adventure in Qatari league, Cuban with the nickname “The Russian” decided to take his chance in South Korea. He signed a contract with the current runner-up of that country, Incheon Korean Air Jumbos, in which he will replace the Slovak Martin Němec.

Sánchez gained his nickname because he was born in Kiev, Ukraine from Cuban father and Russian mother. He was raised in Cuba where his parents returned when he was only 2-years-old.

Spanish version of his Russian last name is Bozlueva and he was a member of Cuban national team at 2007 Pan American Games in Rio de Janeiro, Brazil, where he won bronze medal.

See the profiles of Sánchez and Incheon.