American opposite Clayton Stanley, after a year of break due to knee surgery recovery, returned to playing volleyball. American will spend next season in Asia. 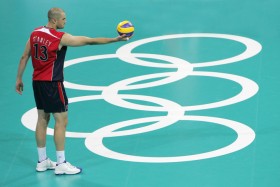 A 35-year-old Stanley will play next season in the Japanese team of Suntory Sunbirds, who finished in fourth place last season.

American “bombardier” will replace the Brazilian Wallace Martins, who was forced to leave the club because of health problems.

Stanley is one of the most trophy players in new volleyball era. With the national team of USA he won gold medals at Beijing Olympics and World League in Rio de Janeiro, both in 2008. He also has three gold medals won at North American Games (2003, 2005, 2007).

See the profile of Stanley and Sunbirds.

ECH W: Mencarelli – “We are young but ready”

POL M: Anastasi – “I removed Bartman because of bad form”