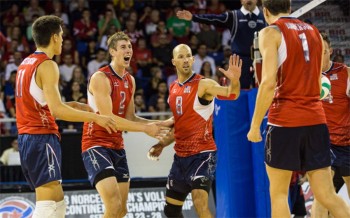 Matthew Anderson scored 17 points for USA, while William Priddy and Maxwell Holt finished with 11 apiece. On the Canadian side Dallas Soonias recorded 9 and John Gordon Perrin finished with 7.

Anderson also had a good serving performance with 3 aces for the Americans and also in blocks with 10 against 6 by Canada whose captain, Fred Winters played only in the first two sets and left the match injuried.

The Norceca Men’s Continental Finals at the Langley Events Centre had a full crowd of 5,000. This was the best attendance for a Volleyball competition at this Facility that hosted its second international tournament.

“At the end of the day, the most important tournament we play in, besides the Olympics themselves, is the NORCECA tournament. For us to come in here and win like We did is a wonderful achievement for our program”, stated head coach of USA John Speraw.

“We got outplayed completely by the USA,” said Canadian coach Glenn Hoag. “We couldn’t receive so We couldn’t establish any offense and They played great block defense. We had a chance in the first set but we made too many unforced errors.”

For setter Dustin Schneider, this was a tough match and talked about how hard was to lose captain Fred Winters, but recognized how big USA performance.

“Obviously (Fred Winters) is a big part of our serve reception, but it was more a credit to the American guys. They were putting pressure on us from the service line even when Fred was in. They played really well and executed their game plan and they served the ball a lot better than us,” Schneider stated.

“This was our best match of the tournament,” said American captain Sean Rooney. “We put a lot of pressure on them with our serve and that was something we were working on since World League ended.”

For more news from this competition click on NORCECA Championship 2013 M.