The domestic season just got started in Albania with UMB Volley seizing the first trophy of the year, namely the Women’s Federation Cup. 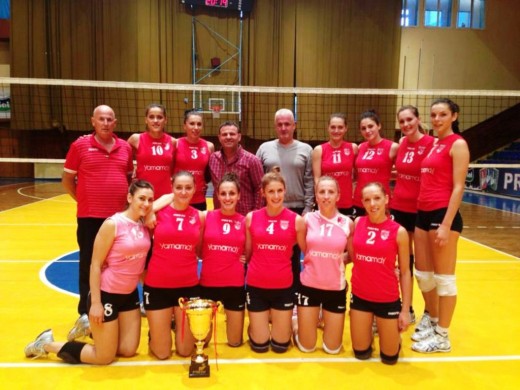 The tournament was held at “Ramazan Njala” sports hall in the city of Durres and joined by the top four teams from the last season. UMB Volley seized the trophy for the first time in their history after edging 2013 national champions Tirana in straight sets.

UMB Volley easily claimed their semifinal match with Teuta in straight sets (25-17, 25-11, 25-5) while Tirana also needed only three sets to cruise past Skenderbeu (25-13, 25-16, 25-17). Though everyone was expecting a very close final match, this did not happen as the players of UMB Volley dominated the scene from the start up to the end. The addition of Kleda Shkurti, Klonarda Nezaj and Xhozafa Mecollari has significantly strengthened UMB Volley whilst Tirana looked weaker than last year. UMB Volley cruised to another straight victory (25-17, 25-11, and 25-16) to finish the tournament with an impeccable record.

“I am very happy with this victory as the team played really good but this is only the very first step of a long season” commented UMB Volley head coach Hasan Gurabardhi. “I think that as the season progresses Tirana and Teuta will become much more competitive, so we shall get well ready for this” he continued.

The Men’s Federation Cup is scheduled for next week in Tirana and will officially open the 2013/2014 season also for the teams set to compete in the men’s national league.